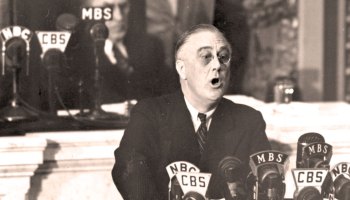 Quick Post: Listen to John Hockenberry in a series exploring the Four Freedoms as defined by FDR in January 1941 as:

Not only did this State of the Union Address create, in a way. a new foreign relations doctrine as he presented them, it was seen by  and is still seen by many as a FDR’s doctrine for life in the United States.

How and where does FDR’s speech reach Asian Americans? Has the nation lived up to the promise of being free from fear? The irony is not lost on the reader of history, nor the guests Mr. Hockenberry invites to the studio.