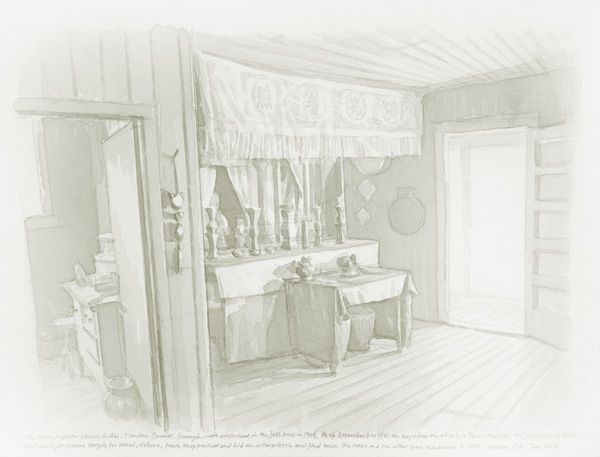 Koplin Del Rio is pleased to debut a new series of work by Zhi Lin, titled Invisible and Unwelcomed People: Chinese Railroad Workers. The exhibition comprises an extensive series of small studies as well as large format drawings executed in Chinese Ink. This provocative body of work is intended to enlighten and document an aspect in American history that has for the most part, been cruelly ignored and forgotten, the brutal treatment that Chinese immigrants endured in building the epic Trans-continental railroad that spans the United States.

Between the years of 2005-2007, Zhi Lin took several research trips following the railroad lines through California and Wyoming as well as attending the annual Golden Spike ceremony in Promontory, Utah several years in a row. Before each trip, the artist researched archives of historical photographs, old maps, aerial photos and sought out oral historical accounts from elderly residents in an attempt to fully immerse himself in that specific time period and carve away at a century and a half of faded memories.

The execution of the ghostly studies are reminiscent of English watercolor masters; Girtin, Constable, Turner, and are intended to conjure up a familiar and nostalgic aesthetic of the same period that tended to glaze over and disguise the injustice and horrors that occurred on the frontiers of the Industrial Revolution in 19th Century America.

Depicted are dilapidated burial sites, graves marked by wooden sticks, a testimony to the thousands of workers who lost their lives in grueling conditions carving their way through cliffs and mountain passes. One drawing, represents the historic site of the Golden Spike location, but instead of illustrating the fanfare that accompanies the annual commemorative festivities, the artist chose to highlight the desolation of an empty section of track that recedes into the horizon, The artist’s notes in the bottom right corner read, “The ground on which Chinese workers were unwelcome. On May 10, 1869, after eight Chinese workers laid down the last rail for the Central Pacific Railway, they, along with 1,500 other Chinese workers who constructed the railway from California to Promontory Summit, Utah were kept away from the celebration of the Golden Spike – the completion of the first Transcontinental railroad.”