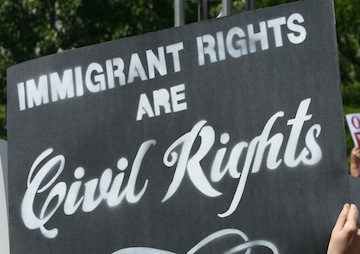 This year, Wing Luke Museum developed the exhibit Belonging: Before and After the Immigration Act of 1965 in its Seattle Chinatown-International District location. This exhibit marks the 50th anniversary of the Immigration Act of 1965, a bill that activated a sea change in the ethnic and cultural make-up of America. The subject seemed fitting, as the museum’s building was repurposed in 2008 from the Freeman hotel that once housed Chinese, Japanese and Filipino immigrants during the pre-World War II era.As we researched content for the exhibit, we wondered what stories existed beyond our purview, among people all around the nation. How do we document our own lives?(You can check out the exhibit here http://ow.ly/KOcEW)
We issued a national call for submissions for art and words about immigration. The response we received was tremendous. While the influx of submissions meant that we regrettably couldn’t include every entry, it also confirmed the urgency of collecting and archiving these experiences.We are proud to present this crowd-sourced showcase of some of the many rich stories within our communities. May we continue to find new ways to collect and preserve these narratives, and reclaim how history remembers us.

But what is next? The nation still leaves immigration on the table– left under a stack of other pieces of legislation that don’t take precedence– but are clearly easier to work with.  Some may argue that the full complexity of the debate has yet to even surface among legislators. Here are several links to online resources, articles and some scholarly materials to help you in your classrooms.